Colchester United take on Port Vale on Saturday, aiming to extend their recent excellent run of form in League Two.

Over the past ten games, the U's sit only behind Luton in the form tables in a run that has taken John McGreal's men into the thick of the promotion battle in League Two.

But Port Vale have been in equally good shape in recent weeks under the management of Neil Aspin and will be hoping to climb the table in the coming weeks.

The historical record just about gives the U's the edge, with 23 wins to Port Vale's 20 and 12 draws for the two teams. 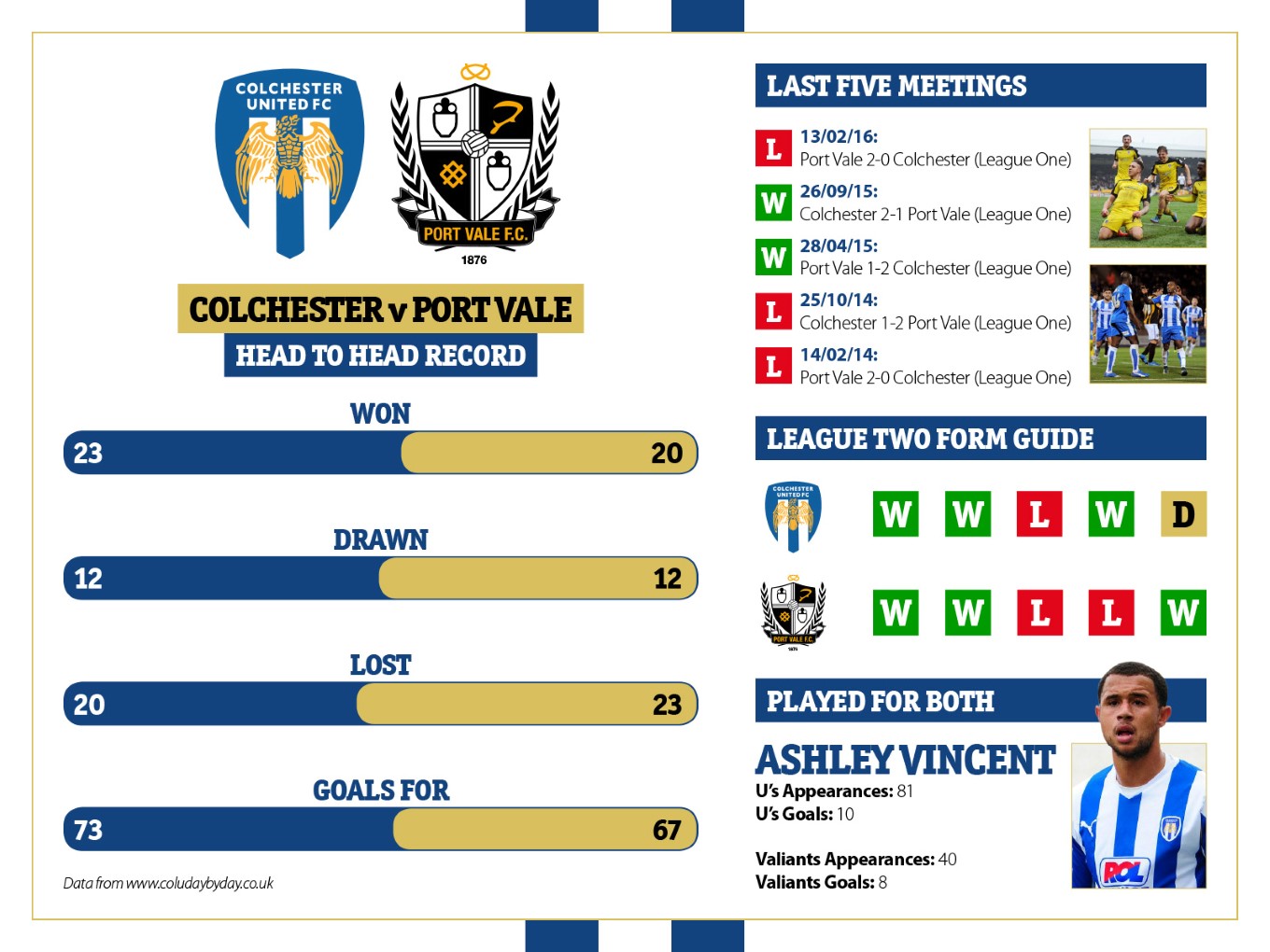 Tickets for the game will be available at the Advance rate until 2pm online and you can also pre-order your Col U match programme whilst you're there!

There was nothing to separate the two sides on Saturday afternoon, as the U's and Port Vale shared the spoils.

The two sides came into the match as two of the most in-form in League Two, and each team had a half of being on top in what was overall a closely fought affair.

Sammie Szmodics was on the mark once again and the U's had other chances to extend their lead, but Vale were strong in the second half and earned an equaliser fifteen minutes from the end.

The first sight of goal went to the visitors, as David Worrall sprung the U’s defensive line, but his shot lacked the power to test Walker.

But the U’s responded well, with some fluent play around the Vale area in the first five minutes.

Sammie Szmodics was in confident mood and flashed a first time effort just past the upright, before then setting up Drey Wright, whose near post effort was blocked by Joe Davis.

At the other end, the ball dropped invitingly for Ben Whitfield, whose powerful first time effort was fended away by Sam Walker.

Szmodics had another effort deflected behind for a corner but eventually got his rewards on 33 minutes.

Lapslie’s through ball sprung the offside trap and Szmodics kept his calm as he rushed through to slot past Boot.

They should have been two ahead three minutes later as some superb work by Mandron put Wright into the box, but somehow his low effort was turned behind by Boot.

All told, it was a confident first forty-five minutes from John McGreal’s men, but Vale came close twice early on in the second half to equalising.

Antony Kay took aim from distance to strike in a low shot that Walker turned behind as it came through a host of bodies.

From the corner, Smith flicked on at the near post and it was set to drop inside the far upright, but Lapslie was there to head away.

And whilst the first fifteen minutes of the half then became a more even affair, Vale went close again to equalising on 62 minutes when Kay rose highest at a corner to head against the bar.

Vale’s aerial bombardment saw the U’s make their first change with Cameron James coming on and the home side going to their familiar three at the back formation.

Vincent-Young had a shot blocked on the edge of the Vale area, before Lapslie blocked bravely with twenty minutes to go to keep the visitors at bay.

The U’s were pegged back as Vale got the goal their efforts deserved, with substitute Tyler Denton crossing for Marcus Harness to head home.

But, as at Swindon a week before, the U’s almost got back in front straight away as Szmodics’ shot clipped the top of the crossbar with Boot beaten.

Vale were a little happier to sit in and protect what they’d earned in the second half, and it finished all square in the final home game of the year.

Next up, a trip to Crawley on Boxing Day as the U’s look to push into the top seven.

Colchester United take on Port Vale on Saturday, as two of the division's form sides come head to head at the weekend.

Over the last ten league matches, the U's have the second best record in the division, collecting twenty points in that time.

But Vale are not far behind, having collected nineteen points over the same period in an upturn in form since the arrival of manager Neil Aspin.

Both sides will be looking for all three points to keep up that positive record in what promises to be a cracking match.

Tickets are on sale now on the club's ticketing website, with parking also available for the final home game of 2017!