Colchester United head to Meadow Lane in a battle of two of League Two's form sides.

Only Luton have matched the points collected by John McGreal's men in the last ten matches, as the U's have thrust themselves into the thick of the promotion race in the last few weeks.

They also top the recent away form table but come up against a Notts County team who top the home form table over the same period.

An intriguing match therefore lies ahead for John McGreal's men, who have kept six clean sheets in their last nine league matches.

Speaking at Thursday's press conference, John said: “It’s going to be our biggest test of the season by far.

“It’s going to be a huge task for us but we’re in a great run of form ourselves and it’s great to try and pit your wits against a top team.

"We found it tough when we went there last season but now it’s a little bit different and we’re in a little bit of form.

“But they’re in great form as well and sitting joint top. It should be a good game and one we’re really looking forward to.”

The U's are set to be without Doug Loft after he came off with a shoulder injury in the 1-0 win over Lincoln City, but otherwise the team are in good shape prior to the trip to Nottingham.

Colchester United have lost 2-1 at Notts County, as a point was snatched away at the death

Ryan Yates' injury time strike gave the host the win, after a late Sanmi Odelusi equaliser had looked like earning a draw.

The U's dominated the first half, but couldn't get the goal that their play deserved.

County came back into it after half time, and took the lead when Ameobi converted from the spot following a foul by Mandron.

Mandron then missed a penalty himself after Jackson was felled, but sub Sanmi Odelusi levelled things up in the eighty ninth minute.

The injury time heartache came when a corner was flicked on and Yates swooped to score the winner.

McGreal made one change to his starting line-up, bringing in Brandon Comley for the injured Doug Loft.

Comley came off the bench in the first half on Tuesday night for Loft, and the loanee’s place on the U’s bench was taken by Cameron James at Meadow Lane.

The hosts were unbeaten at home, but it was the U’s who had the better of things early on.

Mikael Mandron felt he was fouled on ten minutes, but recovered to get possession and narrowly miss the target with his subsequent shot.

Drey Wright then shot tamely wide, before Ryan Inniss climbed highest but could only head over from a corner.

From another U’s corner, Mandron’s header was deflected by Tom Eastman, but it looked like the initial header was going wide.

On nineteen minutes, the hosts had their first foray into the U’s box but Inniss and Eastman combined to clear a clever free kick routine.

Five minutes later, Eastman got forward on the right, found Mandron but the shot was weak and was comfortably fielded by the County keeper.

A flowing move came next for the U’s, ending with a rushed first time shot from Sammie Szmodics flying well over the home crossbar.

A break by the home side saw a shot straight at Sam Walker, before Ryan Yates had a couple of efforts.

First, a volley went straight at Walker, then he was inches away from making contact before the U’s stopper fell on the ball.

In injury time, the U’s had the final chance as Eastman stretched to reach an Inniss header but couldn’t find the target.

The second half started relatively quietly, but that changed just ahead of the hour mark with the first opportunity of the half.

Frankie Kent had to make a last ditch block, and seconds later, Alessandra just failed to get on the end of a Grant cross to the far post.

Grant then had a shot blocked by Eastman, with the rebound shot from Dickenson saved by Walker.

On sixty five minutes, Ameobi’s powerful header took a deflection when it looked to be heading into the bottom corner.

He wasn’t to be denied though, as from the resultant corner, Mandron was adjudged to have committed a foul and Ameobi drilled home the spot kick.

The U’s then got a penalty of their own when Ryan Jackson burst through two players and was clumsily brought down inside the home box.

Mandron had the chance to make amends for conceding the penalty for the opener, but his strike wasn’t far enough into the corner and Fitzsimons made the save.

John McGreal made two changes to try and get a late goal, bringing in Sanmi Odelusi and Kyel Reid for Lapslie and Vincent-Young.

And it was Odelusi who did get the equaliser, slotting home from a superb through ball from Mandron.

That goal came in the eighty ninth minute, but there was an even later goal for the hosts that gave them the three points.

A corner was flicked on at the near post and Yates was on hand to head home at the far post.

It was a devastating late blow for the U’s, who more than matched the Magpies over the course of the game and would have more than deserved something to take home to north Essex.

Colchester United supporters are able to buy tickets for the away game at Notts County on the day of the match.

Tickets will remain at the special price of just £10 for adults, and a big crowd is expected at Meadow Lane for the battle of the division's in form sides.

Ticket prices are as follows:-

Tickets can be purchased from the Away Ticket Booth, which is cash only. 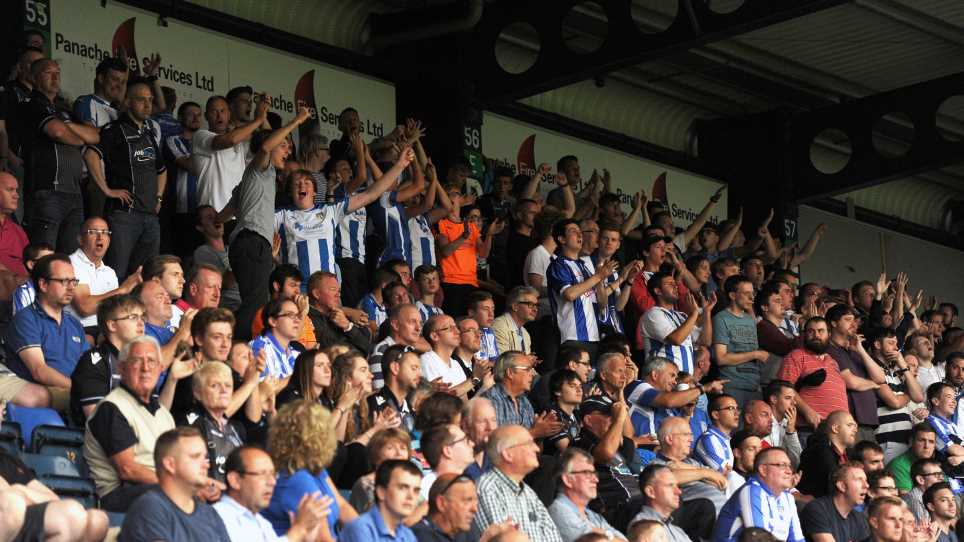 It's Notts Next Up