Colchester United are back on the road on Saturday, as they take on Yeovil Town at Huish Park.

The Glovers' home venue of course holds special memories for the U's, but John McGreal and his players will be looking to gain revenge for a dramatic late defeat on their visit last season.

The U's were leading 1-0 with time running out, but lost 2-1 in the dying embers of the match.

The home side come into the match fresh from another victory at the death, grabbing all three points on the road as they defeated Chesterfield at the Proact Stadium.

Despite that defeat last season, the U's have a positive recent record against the Glovers, winning four of the last five.

A win would lift the U's back up towards mid-table, as September's fixtures come to a close. 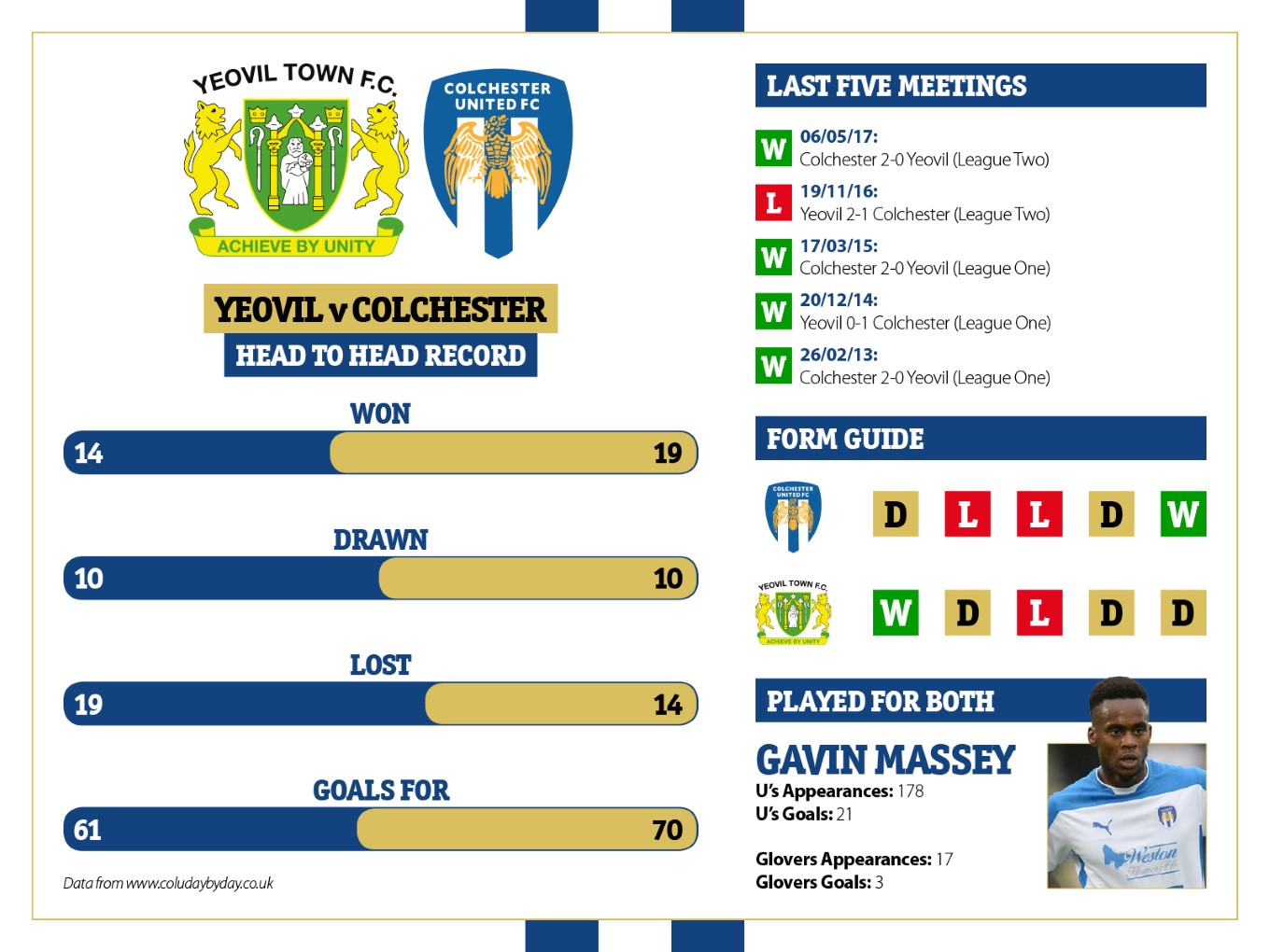 Tickets for the game are priced as follows:-

The U's have made it four points on the road this week, with a 1-0 win at Yeovil Town.

Sean Murray scored his first ever U's goal to make it 1-0 at half time, a lead that the U's held onto after the break.

The goal came at the end of a dominant spell up to half time, with the strike coming just two minutes before half time.

Nine of the ten outfield players had a touch in the build-up, and added to the clean sheet, it made it a productive visit to the South West.

The hosts started in confident mood, but it was the U’s that had the first shot as Kyel Reid hit a long range effort well wide of the target.

That came on three minutes and it was a further nine before Yeovil had their first sighter, a deflected shot from Olomola.

Otis Khan then hit a curling effort just wide, before Ryan Jackson’s ambitious effort from all of forty yards out cleared the home crossbar.

The first effort on target came on twenty one minutes, but Sam Walker firmly palmed the ball out from Thomas James’ free kick.

He couldn’t prevent Olomola volleying home three minutes later, but the referee chalked it off due to a foul by Sowunmi just before the ball reached his teammate at the far post.

The U’s controlled things from this moment on in the first half, and they were denied a goal on at least two occasions in the following ten minutes.

First, a Mikael Mandron header was cleared off the line and then it looked like Hanlan was impeded as he went for a second header.

Three minutes before the break, the U’s did break the deadlock, with probably their best passage of play.

The ball was moved from right to left, via a number of U’s players, then Reid found Sean Murray and he drilled his twenty yard shot low past the home keeper for his first goal in U’s colours.

In injury time, there was a scare, with Sid Nelson heading over the bar from a right wing corner, following a deflected shot by Zoko.

The half time whistle went seconds later, and the U’s were good value for their solitary goal lead.

They were on the front foot again at the start of the second period, with Hanlan’s turn and shot deflected over the bar.

In a break after fifty one minutes, Yeovil had their first chance of the half but Bailey couldn’t keep his shot down after Kent and Inniss had prevented Zoko from getting a shot away.

The U’s were keeping the hosts at arms’ length, and were forcing Yeovil to misplace passes and become disjointed in their play.

That continued after the influential Doug Loft was replaced by Brandon Comley, with the loanee making plenty of tackles and interceptions in his twenty three minutes.

In one such incident, he won the ball back and then set Jackson away on the right – his far post cross just evaded the diving Mandron.

As in the first half, the hosts had a late chance to score, this time it was Sowunmi who couldn’t get the correct contact on a header and the ball flew safely wide.

As the game went into injury time, McGreal introduced Kurtis Guthrie for what was his first action since an ankle injury suffered in February.

The U’s forward was almost a magnet for the ball, and Yeovil defenders, as he helped his side to a deserved victory, and a first clean sheet of the campaign.