Colchester United are back on home turf on Saturday, looking to extend a scoring run that has seen them top the pile for goals scored in League Two.

John McGreal's men are unbeaten in four coming into the match against Bury, who sit in twelfth place so far this season.

The U's are set to name a similar squad that travelled to Oldham last week, although Tom Lapslie is moving closer to a first team return after a successful hour on Thursday night. 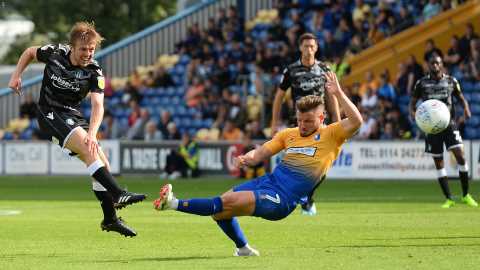 Tickets are available at the Advance Rate online until 2.00pm on Saturday and don't forget our matchday bar is open for the first time for the Bury game, from 12.15pm.

We look forward to seeing you on Saturday!

Colchester United fell to only their second defeat of the season on Saturday, as they were not quite able to fight their way back into the game against Bury.

Goals either side of half time had put the Shakers in control of the match, but the U's kept going and were given late hope when Luke Norris converted a penalty for his seventh of the season.

The home team - not helped by the loss of Frankie Kent and Tom Eastman during the course of the first half - couldn't find that second goal though and the points headed back to Lancashire.

It was Bury that started the game the brighter, with the U’s struggling to get their foot on the ball and move it around with any purpose.

They then lost Frankie Kent with just nine minutes on the clock, after a clash with Chris Stokes.

It was the U’s who got the first sight of goal on eleven minutes as a long pass forward by Eastman was nodded back by Norris and Szmodics forced a smart stop out of Murphy.

Next, Senior burst into life, beating three before setting up Nouble, with his shot well blocked by the Bury defence as the U’s grew into the game.

It was not going all the U’s way, though, as a dangerous free kick from O’Shea dipped just over the bar with Barnes at full stretch.

Nouble went close again on nineteen minutes, as after being slid in by Szmodics, he forced a low stop out of Murphy.

Bury were a danger through the likes of Dagnall and O’Shea, but the U’s back line held firm and, on 31 minutes, escaped through a bursting run from Vincent-Young and it ended with Szmodics squirming a shot wide as he fell.

The visitors took the lead on 35 minutes, as some hesitation in the U’s defence allowed the Shakers to seize on the ball and Moore showed good composure before lifting it into the roof of the net.

The U’s were almost level three minutes later as some excellent approach play got Senior into the box, but it was a fine low stop from Murphy to keep it at 1-0.

The home side had responded well to going behind, with Pell driving one just over, but they went into the break one behind.

The U’s lost Eastman to injury at half time too and started the second half as a three, with Comley and Jackson alongside Prosser.

They were the first to go for goal in the second half, with Senior bursting forwards and sending in a low cross that Szmodics could only put wide under pressure.

Barnes pulled off a fine stop from Dagnall shortly afterwards, but could do little to prevent a second of the game for the Shakers from the same player.

He hit a low swerving shot that clipped the inside of the far post to make it 2-0 and take the game further from the U’s.

The U’s took a little while to find their feet after the second, but had a spell of pressure that threatened to pull one back.

They made their final change with the introduction of Mandron in place of Comley, as they rolled the dice to get back into the match.

They got their glimpse of hope with eight minutes to go, with Norris converting from the spot after he was tripped from behind.

The game was open going into the final stages as the U’s pressed for an equaliser, with Telford curling one just wide when he looked destined to score.

The U’s then had a real chance of an equaliser as Dickenson strode onto a loose ball on the edge of the box, but he was unable to get his shot on target this time.

And that was the last chance of note as the visitors took the points this time.