In the U’s latest pre-season friendly, Scottish front man Denny Johnstone was once again a key player. Through the duration of the game he enabled the U’s to get men up the field, and proved himself to be a threat to the Hammers back line. 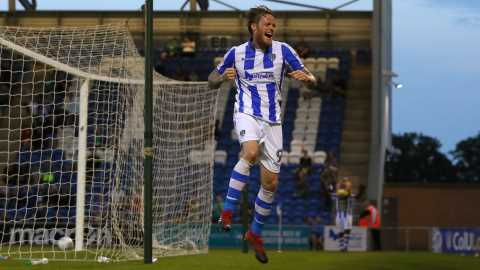 The U’s began the match at kick-off spreading the ball around making some great runs off the ball. Denny had a chance early on to get round the back of the young West Ham centre backs, but the ball was not quite there.

Just five minutes in and an awesome ball forward by Tom Lapslie, dropped just in front of Drey Wright, who took the ball into his stride, and tucked it into the back of the net below the keeper's reach.

As the half went on, Denny had early signs of eagerness and good fitness shown through in his closing down of the defenders and opportunities created.

He was proving to be a threat to the young Hammers side, moving from the left to the right side of the pitch, giving them plenty to think about in where he is and what he's scheming.

Halfway through the first half, Denny won the ball from the opposition’s defence several times by closing them down and making them panic.

Fortunately, this eager spirit echoed throughout the team giving them a boost, upping the workrate  and helping them to make an impact which set the tone for the rest of the game.

Just before half time, the ball was crossed in just in front of Denny inside the box, but unfortunately the ball had not dropped enough meaning that he could not quite keep the shot below the bar.

The U’s continued to dominate the visitors for the rest of the half but unfortunately no more real chances came their way.

In the second half Denny made an early tackle, winning the ball for his team , he then received the ball in the air, headed it down the line as part of a one-two, then darted forward past the despairing defenders and won a corner for the team. Unfortunately, the ball was cleared by the defenders this time.

In the 60th minute, Denny made a great run down the left wing showing real class by keeping the ball on the line for a floated cross to his awaiting teammates in the box. However, the ball was swiftly cleared out by the young West Ham number 2, Alex Pike.

A minute later, and the U’s had a free kick on the edge of the box on the left. The ball was whipped in at speed towards the edge of the six yard box, and was met by a ruthless Denny Johnstone who rose well and directed a powerful downward header past the reach of the West Ham keeper.

In the 71st minute Denny was subbed alongside six other players who were met with a standing ovation from the crowd.

Another player that showed up well in the game was Tom Eastman, now a long serving player at the club. Throughout the game he commanded the back line.

In the first half, he was spreading the ball across the back creating space for the midfielders to receive the ball and create an attacking threat on the opposition.

As the game went on, he continued to show good judgement on his tackles and although he knew that his opposition had superior pace, he made sure to keep a space between him and the player to make sure that he could get to the ball before them.

Towards the end of the first half West ham began to get a series of corners which Tom took responsibility of  organising his team to clear the ball effectively. This organisation paid off as they managed to clear the ball up  the line.

As the second half kicked off, he ordered the defence to make a high line pressing the Hammers back.

Ten minutes after half-timem he pressed forward, collecting the ball from Kent and drove into the box drawing in a foul just outside the box, but unfortunately the referee did not agree with the home fans in the crowd of 2,626 who pleaded for a free kick.

He managed to cope well with the aerial threat of the oppositions number 9 Julian Kristofferson who was usually beating the other players for headers, but Tom judged the ball well and positioned himself perfectly.

Unfortunately in the 62nd minute, he rolled his ankle and was brought off as a precaution, as John McGreal continues to look after his players through pre-season.