Over the past two seasons,the EFL has joined forces with Mind, the mental health charity, to help improve football's approach to mental health and raise awareness around the country.

Spearheaded by HRH The Duke of Cambridge, Heads Up aims to harness the influence and popularity of football to normalise the conversation around mental health.

The Heads Up Weekends will highlight the power of talking as a way to support one another and dispel the stigma, with activity planned at fixtures across the men’s and women’s football calendar.

On Saturday, the U's will join clubs across the nation to display the Heads Up emblem across the stadium, programmes and player kit, in a major unifying moment that aims to get the nation talking about mental health.

U's midfielder Harry Pell insisted that he benefitted from talking when he was recovering from a long term injury, and urged people to do the same. He said: "It was a really difficult time for me mentally when I couldn't play games and help the team."

"Talking to family, friends, and to staff and teammates at the club, definitely made it more bearable and helped me to keep my mind focussed on my recovery."

"Everyone should be able to open up to someone if they need to, and campaigns like Head's Up are making that easier and easier.

With over 15 million football fans in England, Heads Up aims to use the power of football as a way to show the nation that we all have mental health and it is just as important as physical health.

Over the Heads Up Weekends, the aim is to reach every single football fan to raise awareness that we will all face ups and downs in life which will affect our mental health, but we can all do more to support each other - and that starts with talking.

The weekend will further highlight the important work taking place across football to improve the approach to mental health in football.

This includes the EFL and Mind’s ground-breaking charity partnership, which began in 2018 and has provided increased visibility, important training and support for Clubs, staff and fans, and raised vital funds for the mental health charity.

The simple power of conversation - talking and listening – can be the first step to better mental health, and to making it OK to say we’re not OK. 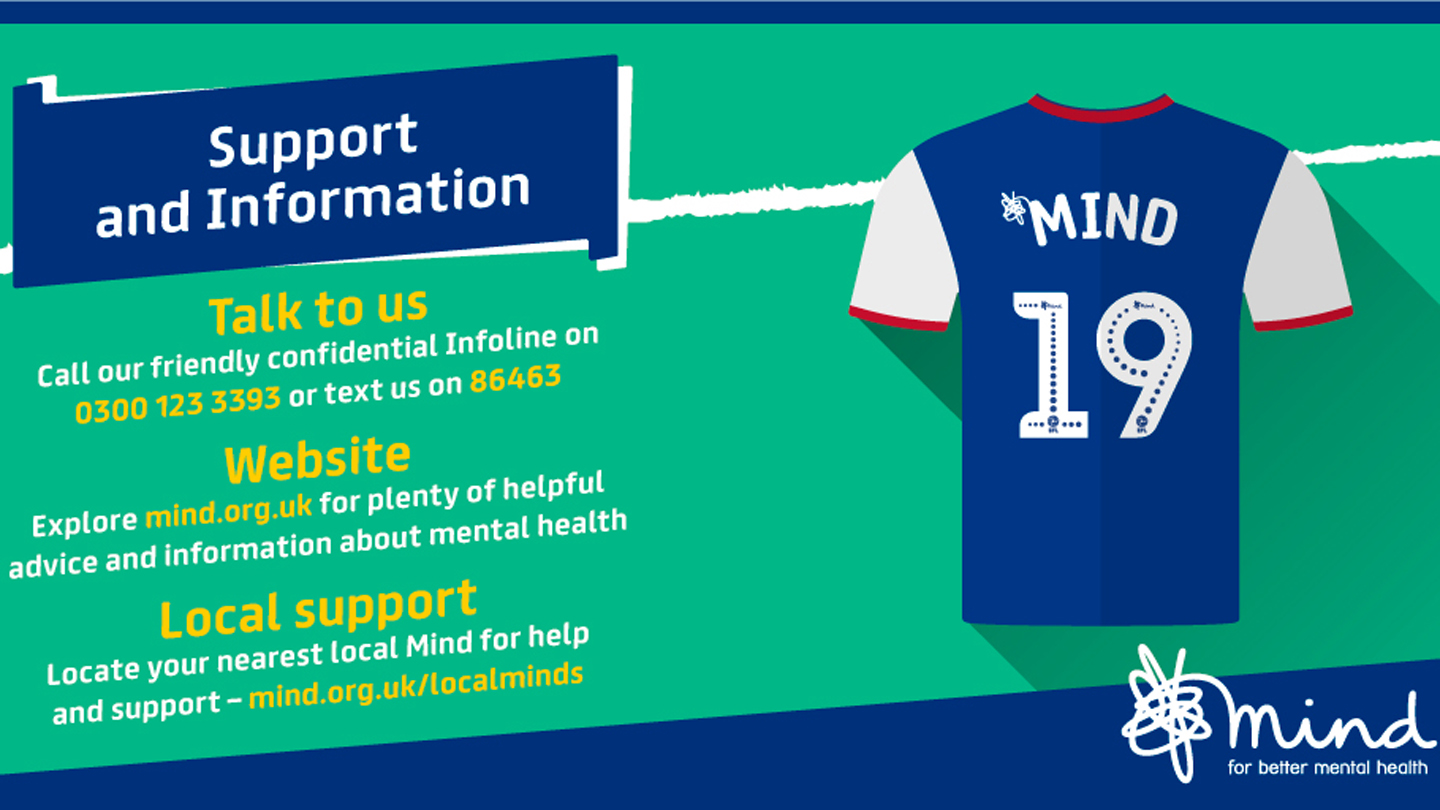 EFL Chairman Rick Parry, said: “Through our ground-breaking partnership with Mind, the EFL and its clubs have worked hard to improve the approach to mental health in football and wider society, over the past two seasons."

“Football provides a platform like no other to raise awareness and tackle society’s biggest issues and we’re proud to offer our support to the Heads Up campaign, as football comes together to further encourage the conversation around mental health. I look forward to seeing the impact over the two weekends.”

Whether you or someone you know is struggling, or if you want to help dispel the stigma, kick off a conversation about mental health this weekend.

Find out more and get tips from Heads Up’s charity partners (Mind, CALM, Sporting Chance and Heads Together) – visit www.headstogether.org.uk/heads-up.

Those wanting immediate support can also text ‘HeadsUp’ to 85258 to connect with a trained crisis volunteer – a service run by ‘Shout’ and powered by Crisis Text Line, which is available 24/7 and free to text from most mobile networks.

For further advice and support please visit www.mind.org.uk. To learn more about the EFL’s partnership with Mind, please visit: mind.org.uk/onyourside