These are crazy times and I do hope most of you are staying safe and keeping free from the virus. Please do be careful while you wait to be vaccinated.

This pandemic has been a real test of character for our club and I’m constantly grateful for the support we are receiving.

Not least the loyal support from our fans and sponsors and because of the ‘above and beyond’ attitude of our staff.

A great example was the effort that was put in to get the game on against Cambridge which followed so much rain during the days leading up to the match, and then several inches of snow on the very morning of it.

Under Tim Waddington’s leadership, the staff at the stadium and a number of our Academy players spent hours putting on and taking off the rain covers and then shovelling the snow off the pitch just before the game.

It was also a great demonstration of the lifecycle at a club like ours because in a few seasons' time, those young players that made sure the pitch was playable for the first team will have a fresh crop of Academy players doing the same job for them.

Then, many seasons later, maybe one of them will be our Head of Media and be in the thick of the action, like David Gregory was, clearing the pitch again for those that have followed him into Colchester United’s first team.

One-Off Supporter Shirt
The voting for the shirt that the team will wear for the game against Southend on the 20th April closes in nine days’ time at midnight on Sunday 31st January.

As it stands, only 358 of fans with loyalty tokens have voted and 279 of those now have additional tokens to cast additional votes with. 1,273 fans have yet to vote at all. As shown below, the Blue and White kit is winning with 55% of the votes but the Yellow and Blue kit is not that far behind with 40%. 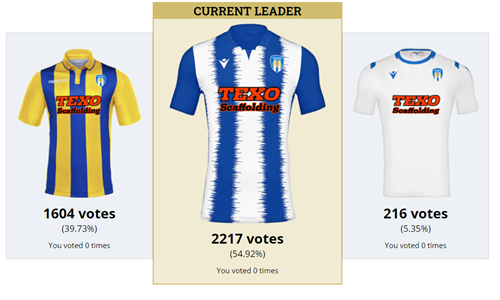 Please do vote for what will be an historic shirt which money will not be able to buy.

Transfer Window
There is only a week left of this transfer window and although most transactions happen in the last few hours, let alone days, I am not expecting much else to happen at Colchester United.

We have a strong squad with some key players returning to fitness. I appreciate some of you will be disappointed with that news and I understand your frustrations but we are in a good place considering the challenges we have faced and most importantly, we will still be in a reasonable place when we eventually return to more normal times.

Club Finances
Two Chairman of clubs in our league have spoken to me recently with concerns as to how they will pay this month's salary. We still have at least four months of the season remaining and EFL clubs seem to have received all the help they will get and they have deferred everything they can possibly defer.

I think we all believed we would have some fans back into our stadiums by now and that there would be some limited use of the stadium on non-matchdays. Sadly those things haven’t materialised.

Therefore, the roll out of the vaccine and the return to those more normal times can’t happen fast enough as far as I am concerned.

We will get through this but as I have always said - I have to make the right decisions even when they are tough or unpopular decisions.

And Finally
During the last lockdown in May, Harry Pell became aware of a Colchester United fan, Daniel Whymark, who was raising money with his wife Katie in memory of their son Lucas who tragically died at just one day old.

Being a Dad himself, Harry made contact with Daniel and offered to put the shirt he wore against Manchester United up for auction on Twitter. The shirt raised £3,500 for local and national baby bereavement charities.

Pelle, who on the pitch is our tough tackling captain but is a big kind-hearted softy off it, updated me a couple of weeks ago to explain that Daniel and his wife Katie had just welcomed a new son into the world and had named him Harry.

We look forward to seeing young Harry Whymark at the stadium in a few years’ time when I’m sure he’ll be wearing his favourite number eight shirt.