Bradford City's campaign didn't come alive until the second half of the season, with their play-off push stumbling over the past few games.

The Bantams are without a win in their last five games, with two draws and three losses in that period. Before their winless streak, City had been sitting in tenth position, just two points away from the top seven with a game in hand.

But their recent form has dropped them to fourteenth in the table with forty-eight points, nine behind seventh placed Newport County. The resurgence of the club conincided with the nine January signings made by joint managers Sellars and Trueman, that lead the club to seven wins from nine games.

The joint managers will be looking to rediscover their winning form again, with City's eleven remaining games of the season plenty enough to get them back knocking on the door of the play-offs.

Mark Trueman (right) knows his side must be better in the final weeks of the season if they are to move back up the table, speaking after the 2-0 defeat to Scunthorpe on Tuesday evening. 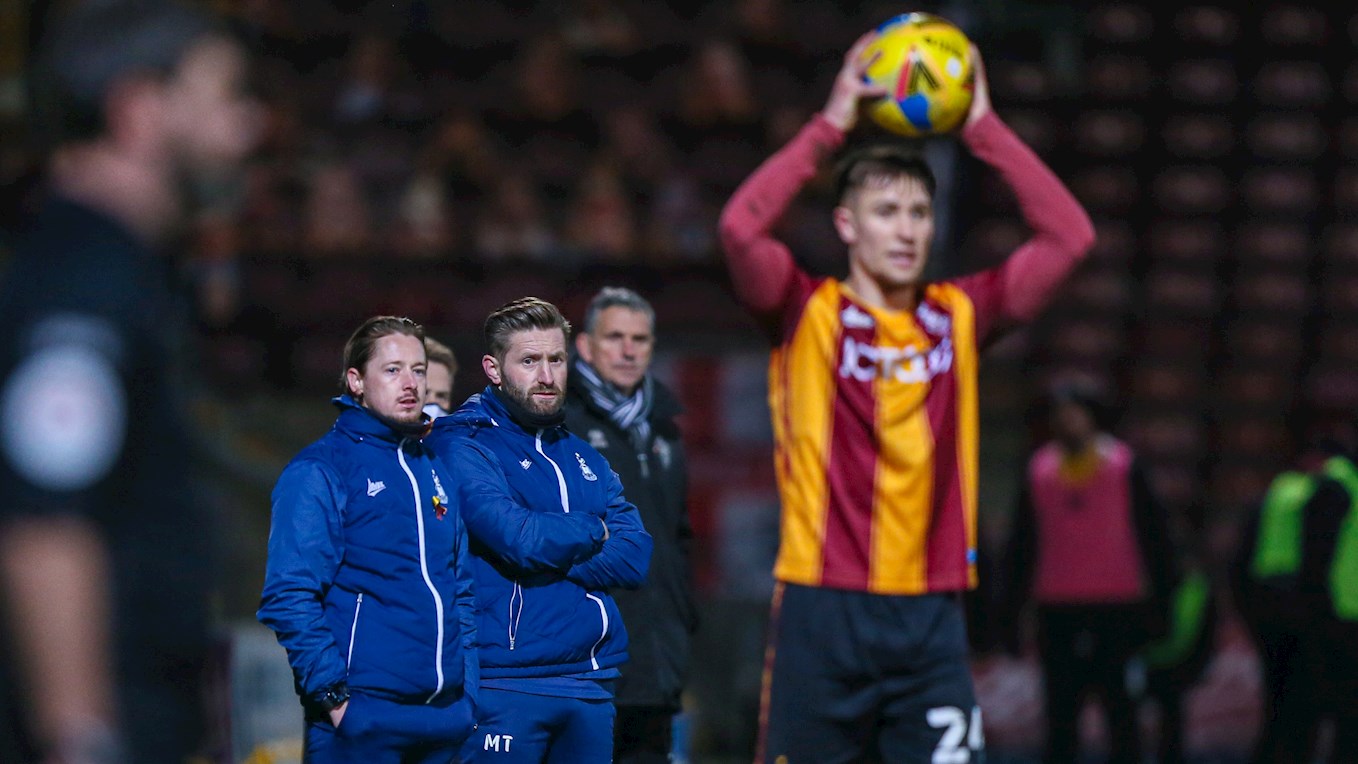 "We know we can be better in all areas of the pitch, and just did not play as well as we have done in previous weeks." - Mark Trueman

"We created some good chances throughout the match but, overall, it was a below-par performance - based on the standards we have set. We have to see the character of the group and react positively.

"We need to stick to what we are trying to build here and know that, if we can play to our potential, we can beat anybody in this league. This group of players has shown over the past 18 matches they have good character. They work hard and keep fighting until the end."

Perhaps the most impactful of the January signings is top scorer Danny Rowe. With eight goals to his name when he arrived at Valley Parade from Oldham Athletic, Rowe has found the net a further four times for the Bantams in his thirteen games.

Another key signing for Trueman and Sellars was the skillful winger Charles Vernam. Signing from Burton Albion, Vernam's last game at the JobServe Community Stadium was a memorable one, when he scored a hattrick for Grimsby Town's 3-2 win in February last season.

Recruitment across the pitch was the order of business at Bradford City, with centre back Niall Canavan brought in from Plymouth to sure up the defence. His impact has seen his side keep four clean sheets in his eleven games for the club.

Colchester United came up against Bradford City in the opening game of the league season in September, when the two played out a goalless draw at the Utilita Energy Stadium.

Watch Colchester United in action this weekend with a £10 match pass from iFollow. Click HERE to get yours.

Get the latest issue of the official Colchester United programme for this weekend's match. Click HERE to get yours.