Devante Rodney's well taken first-half strike was enough to earn all three points for Port Vale, with Wayne Brown's side losing at home to the side directly above them.

The nineteenth minute strike was well taken by Devante Rodney from the left hand side. The U's struggled to create many chances in the first half but looked better in the second without breaking through Scott Brown's goal.

Wayne Brown and Hayden Mullins' side lined up with two changes from the side that started the goalless draw against Salford City in the week.

Callum Harriott was out on international duty with Guyana, so replaced by Noah Chilvers in the starting eleven, with Paris Cowan-Hall dropping to the bench as Ben Stevenson came in to take his place.

The U's started the game positivley, and were perhaps a little unlucky not to have taken the lead after just thirty seconds. Sarpong-Wiredu found space on the right of the penalty area, firing the ball across with a Vale leg deflecting the ball away before Jevani Brown could finish.

But it didn't take long for the visitors to get into the game, and they were keen to press forward and get at United's back four at every opportunity.

Former Colchester United man Theo Robinson was a handful for Eastman and Smith in the centre of defence, and forced the mistake by pulling the defence out of position, allowing space down the left flank, with Darrell Clarke's side taking full advantage.

Vale's top scorer Devante Rodney was the man on target with a good finish as he cut in and curled the ball beyond George and into the top corner, with the U's 'keeper left rooted to the spot.

The visitors could have been two goals to the good five minutes later when Theo Robinson had a chance on goal. Once again the ball came on the left wing from Rodney, with the Vale forward laying the ball on a plate for Robinson, only for the latter to scuff his effort safely into the hands of George.

The U's had to regroup to try and prevent further damage from the away side. Tom Eastman had to be alert to get towards the onrushing David Worrall to put in a challenge and divert the ball away from the Vale winger, with fifteen minutes to go until half time.

At half time, it was the visitors who were ahead, and on top in the game.

Wayne Brown opted for two changes at the break, with Courtney Senior and Junior Tchamadeu introduced in place of Miles Welch-Hayes and Noah Chilvers.

And it was a change that almost brought an instant benefit. Courtney Senior took the ball forwards on the rigth flank, before getting the better of Shaun Brisley, going over the Vale defender's leg only for the referee to wave play on.

The U's were looking much better at the start of the second half, seemingly bouyed by the half-time team talk from Wayne Brown.

But they had to be aware of the threats that Vale still possessed. Tom Conlon and Theo Robinson worked the ball inthe area with Conlon taking on the strike, but George was equal to it as he pushed the ball away.

Devante Rodney was inches away from his and Vale's second of the afternoon with seventy-two minutes played, when his effort struck the foot of the post. From just outside the penalty area, Rodney's effort left George rooted the spot again, as he could only watch the ball bounce off the post and away.

Courtney Senior was looking a threat down the right wing, showing his speed when he sprinted away to deliver a cross towards Rem Oteh in the middle. The U's would have equalised, but for a brilliant stop from Scott Brown, who got back across his goal to palm the ball away.

But despite the late pressure, Wayne Brown's side were unable to break the deadlock as Port Vale took all three points from the JobServe Community Stadium. 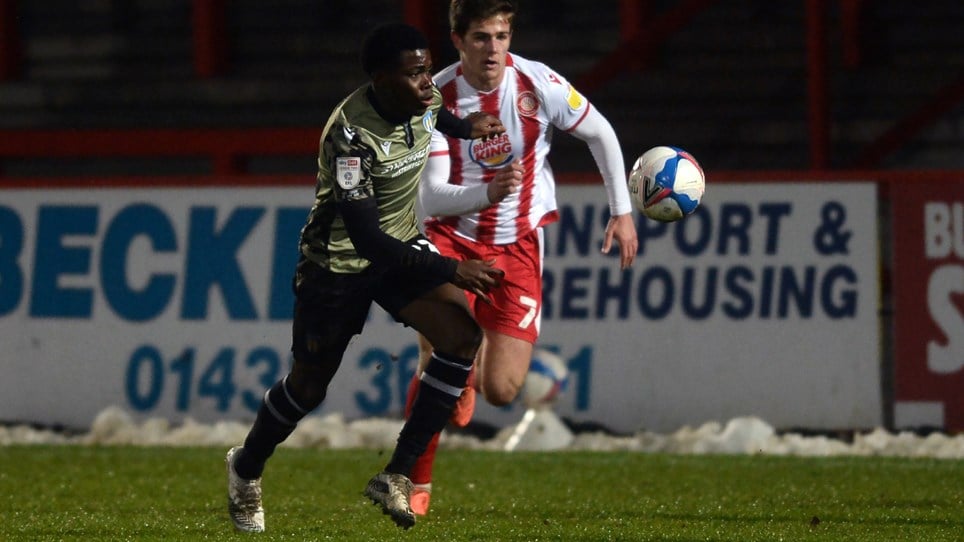