Tom Eastman's ninety-seventh minute header bagged the U's a first three points of the season at home to Bradford City.

Colchester started brightly with Frank Nouble heading off the bar in the early exchanges, but Bradford had chances of their own with Scott Banks going close on more than one occasion.

The first half was evenly contested, a trend that continued in the second half, with both sides going close through Alex Newby and Harry Chapman.

But it was the U’s who emerged victorious, with Tom Eastman scoring the winner in the dying embers courtesy of a superb Noah Chilvers free-kick delivery.

Bradford almost rescued a point with the last attack of the game, but an outstanding block from Al-Amin Kazeem ensured Wayne Brown’s side left with all three points.

Colchester started the game brightly, with Newby and Nouble making themselves a nuisance against a stagnant Bradford in the opening five minutes.

The U’s looked like they were out to prove a point after the disappointing loss against Stockport on Saturday and were pressing with intent and purpose.

Despite a strong start from the U’s, it was Bradford who had the first real opportunity of the game. Banks was allowed to cut inside on his favoured left foot and curl his effort towards goal, but it whistled just wide of the far post.

Banks’ effort seemed to have woken the visitors from their slow start, and they began to control the ball – Bradford’s number twelve had another effort on goal, this time stinging the palms of Sam Hornby in goal.

Colchester handled a good spell of pressure from the Bantams, largely through the help of Chilvers, who came to life in the first half.

The tricky midfielder had a great chance after he burst into the oppositions box, but his effort was deflected out for a corner.

The U’s biggest chance of the first half came when Nouble struck the woodwork from close range. Luke Hannant delivered a teasing ball that Nouble rose to meet, but his effort cannoned off the bar and was cleared from danger.

Wayne Brown’s side continued their resurgence late into the first half, with Chilvers having a few efforts blocked on the edge of the box and Newby nearly penetrating the Bradford backline on multiple occasions.

It was an even affair in the final ten minutes, with both sides pushing for the opening goal, but the score remained level as both teams headed in for half-time.

More of the same was the theme in the second half, both teams emerged looking refreshed, wish the U’s on top in the opening minutes.

Bradford looked to switch the focus of their attacks, with Chapman becoming more involved in the visitor’s attacks early on.

Ten minutes into the second half, and the U’s had a huge chance to open the scoring. Chilvers charged down the wing before crossing into the box, where Newby could only scuff his shot into the turf, allowing Harry Lewis to palm away from danger.

As we entered the final thirty minutes, the game began to stretch, with some late challenges and tired passes making their way onto the pitch.

Bradford had a good opportunity with a well worked set piece, but Newby was on hand to clear the danger.

The game’s intensity stepped up in the final quarter of the game, Freddie Sears was working hard to chase every loose ball and won the U’s a free kick in a dangerous position. The ball in was a good one and substitute Ryan Clampin tried a spectacular overhead kick but could not catch it with any conviction.

The chances kept on coming as Al-Amin Kazeem burst past his marker on the left-hand side, his drilled ball was intended for Sears, but Lewis was able to set Bradford on a dangerous counter-attack, which ended in substitute Kian Harratt forcing Hornby into a smart save.

Bradford had a shout for a penalty late on, but the referee saw no contact from Cameron Coxe and waved play on.

We entered seven minutes of additional time with the game on a knife edge, both sides were looking for a late winner.

A late U’s corner could have put the home side in front when John Akinde, fresh off the bench, guided a header towards goal, only for it to be cleared off the line by the visitors.

But, in the dying embers of the game, the U’s struck a killer blow. A delightful ball in from Chilvers found Tom Eastman at the back post, and the towering defender made no mistake, powering home.

Bradford came so close to an immediate equaliser, a thunderous striker from and follow up saw the Bantams hit the post, before Kazeem threw himself in front of the ball to save the U’s from heartbreak.

Colchester held on for their first victory of the season and will be looking to pick up another three points when Leyton Orient come to the Jobserve Community Stadium on Saturday. 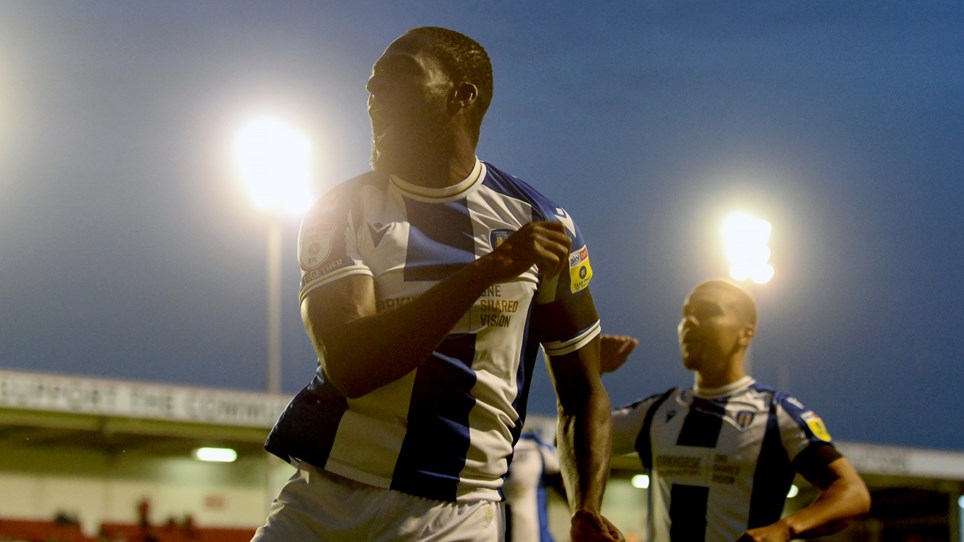