Goals from John Akinde and an excellent first professional strike from Chay Cooper sealed the final three points of the season for the U's at Hartlepool United.

John Akinde's tenth-minute strike gave the U's a half time advantage after Freddie Sears had cut the ball back to the January signing, giving him an easy finish.

But their was no easy finish from Chay Cooper who maked his Football League debut with a sumptuous strike to double the advantage after firing an effort in off the post just after the break.

Sam Hornby provided some heroics between the sticks with some excellent stops to keep his clean sheet, and was also a big part of the win in the North East.

Wayne Brown named a side with two changes from the eleven that started in the entertaining 2-2 draw at home to Walsall last weekend.

Missing from the side were Myles Kenlock and Emyr Huws, with Junior Tchamadeu and John Akinde coming in to take their places.

The bench for the U’s also featured a number of youngsters, with the likes of Brad Ihionvien and Kaan Bennett both making their first appearances in the matchday squad.

It was a lively start at Victoria Park with Sam Hornby forced into a save within the opening sixty seconds of the game. The on-loan ‘keeper had to be aware of the incoming Luke Molyneux and stop the shot quickly from a low cross on the left flank. Hornby seemed to take a knock on his hand in the process, but shook it off quickly to continue in the game.

At the other end, Freddie Sears forced an error in the home defence’s clearance, with Cameron Coxe picking up on the loose ball. The full back was able to drive into the area and forced a good save out of Ben Killip with John Akinde’s follow up effort deflected wide of the mark.

But Akinde wasn’t going to pass up another opportunity, when in the tenth minute he stroked home to put Colchester United ahead. Freddie Sears was forced wide by the home goalkeeper, spotting the unmarked Akinde in the middle of the penalty area to slot home and give his side the advantage.

And the U’s kept the pressure on their hosts after taking the lead, with Noah Chilvers going close a couple of times, with shots just missing the target. Alan Judge did manage to find the back of the net late on in the first half, after collecting the ball back from a corner routine, but the Irishman was offside in the move and the goal was chalked off.

Nevertheless, the visitors maintained their advantage until the break, with Wayne Brown opting for one half time substitution, with Judge replaced by Chay Cooper for his league debut.

It would be a debut to remember for the nineteen-year-old, as he marked his first appearance in Sky Bet League Two with a thumping strike. Cooper struck a right-footed effort from the edge of the penalty area that flew past Killip and into the top corner to put the U’s in a comfortable position in the North East.

The U’s had to be on their guard though, as Hartlepool continued their search to get back into the game, with Sam Hornby thwarting a couple of efforts on his goal. Getting a strong hand to Luke Molyneux’s rising strike, the U’s goalkeeper was also alert for a short back pass from Cameron Coxe to clear the danger.

And with ten minutes remaining, Hornby produced his finest save of the afternoon so far, getting his fingertips to another Molyneux strike, diverting the ball just over the bar and out for a corner.

Hornby’s heroics between the sticks would go on to earn the U’s a clean sheet as they claimed a final three points of the season at Victoria Park, moving them up to a final finishing position in the 2021/22 Sky Bet League Two season of fifteenth with fifty-five points. 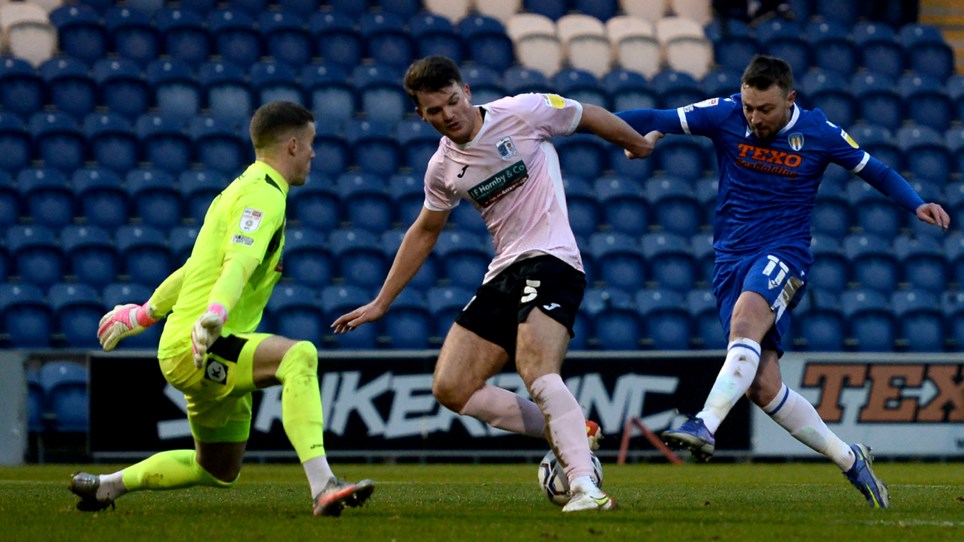 
Two second-half goals from the visitors earn them three points at the JobServe Community Stadium in a difficult afternoon for the U's.